Home » British Pudding Day is celebrated on November 9 every year.

British Pudding Day is celebrated on November 9 every year.

It is a day when pudding lovers can gather and indulge in every kind of pudding that they ever desired.

British Pudding Day celebrates the origins of British Pudding and how the rich culinary tradition behind baking puddings is still alive and a favourite of many all over the world.

British puddings are different from American puddings in that the former comes in both sweet and savoury flavours while the latter is usually a sweet dessert dish.

Due to its rich and complex flavours, British puddings have been a staple cuisine of its people for many decades. This day is just another opportunity to give it the love it deserves.

The History of British Pudding Day

British puddings trace its origins back to 1305, where the word ‘pudding’ was derived from the Middle English word ‘poding’, which meant a ‘meat filled’ animal stomach.’ The British usage of the word ‘pudding,’ however, is closer to the Latin word ‘botellus’ which means sausage. The word ‘botellus’ gave rise to the word ‘boudin’ which then came to mean pudding. Thus, the British pudding is often viewed as a descendant of the Roman sausage.

In the 16th Century, many households had little ovens in the kitchen which did not reach a high temperature. These ovens were useful because they allowed people to bake a white pudding mixture in pastry over a low heat for a long time. Baked puddings were born because of this.

English puddings in the 17th century were either savoury (meat-based) or sweet (flour, nuts and sugar). Both flavours became very popular among the English. Traditionally, the puddings were boiled in special pudding bags. Most traditional British Puddings did not contain meat by the end of the 18th century.

Bakewell puddings became very popular in Britain in the 19th century. These puddings were descendants of the Ancient Roman Flan. Unlike other British puddings, the Bakewell pudding had almonds in it. Initially, they just used a few drops of almond essence in the sweet concoction, but over time, they bigger to add bigger quantities of ground almonds, resulting in a change in the consistency of the topping. Bakewell, a town in Derbyshire, is the source of the pudding’s name. 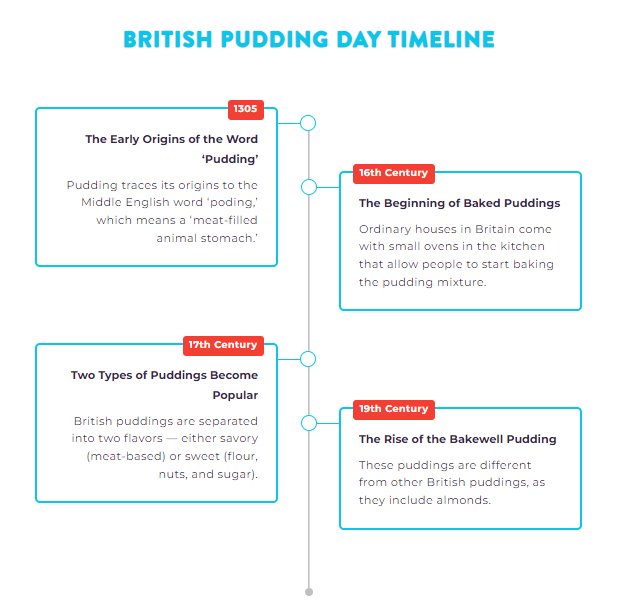 How to celebrate National Pudding Day…

This is the ideal day to go out and squander your money on some delectable puddings. Allow your inner gourmet to indulge!

DIY enthusiast? Make your own pudding to impress your guests.

Sharing food pics on social media is a must. Take some of your best pudding pictures and upload them with the hashtag #BritishPuddingDay.

The earliest print reference for chocolate pudding can be traced back to 1730.

2.      Rice pudding was regarded as a medicine

Until the 19th century, rice pudding was used as a medicine because it helped treat digestive issues.

Pre-Victorian use of the word ‘plums’ actually meant raisins, so there are no actual plums used in the pudding.

The Monmouth pudding in the 17th century was a staple meal for the poor and was made using stale bread boiled in milk.

In the 19th century, Queen Victoria loved the Manchester pudding so much that the chef renamed it the ‘Queen of Puddings’ in her honour.

Here are some of our top five puddings arriving in Co-op food stores (subject to availability) for Christmas 2022:

Co-op is taking millionaire’s shortbread into a new format. Made with Fairtrade cocoa, this slow-baked meringue is filled with toffee sauce, caramel cream and a crunchy biscuit crumb all finished with a Belgian milk chocolate drizzle. 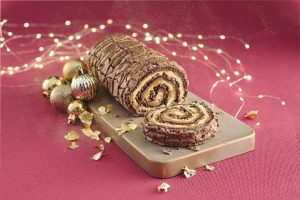 The millionaire roulade is sure to be a showstopper around the Christmas table this year!

These indulgent tarts, part of the Irresistible range, offer an alternative for those consumers who aren’t too keen on mince pies. They comprise chocolate pastry with a smooth chocolate & hazelnut filling, Belgian chocolate sauce and crunchy hazelnut nibs with a touch of gold lustre. 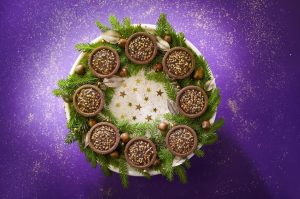 A great alternative to the traditional mince pie, these tartlets are sure to be a winner this festive season

Blonde chocolate is gathering pace so it’s no surprise Co-op included the flavour in its festive dessert line-up. The all-butter and blonde chocolate sponge is served with a melting caramel sauce. 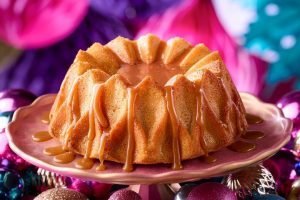 This dessert embraces on-trend flavours such as blonde chocolate.

These gluten-free profiteroles come with a milk-free filling and salted caramel sauce core, complete with a sachet of chocolate sauce for drizzling on top. 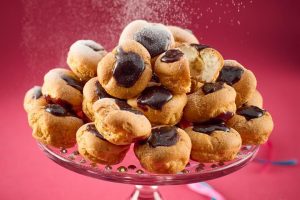 A classic choice with a free from twist

Add some star power to the Christmas table with this gold-lustred chocolate star. It’s filled with a chocolate & peanut mousse, crunchy peanuts, and caramel sauce. It’s sold with a dark chocolate sauce for pouring over at the table for a touch of theatre. 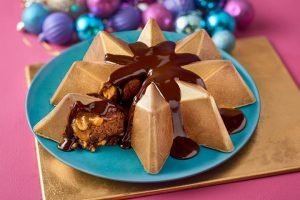 Peanut lovers rejoice! This festive number is sure to be the star of the show.

See all news
← 20% OFF your Christmas Shopping this weekend...
A taste of Christmas at the Braintree Quadrant store... →