February is the second month of the year in the Julian and Gregorian calendars.

The month has 28 days in common years or 29 in leap years, with the 29th day being called the leap day. It is the first of five months not to have 31 days (the other four being April, June, September, and November) and the only one to have fewer than 30 days.

Why do we have leap years?

The number of Earth’s revolutions is not the same as the time it takes for the Earth to get around the Sun. The Solar year is 365.2422 days long, a length which no calendar year can accommodate.

By having leap years every four years we ensure that the months consistently match up with the seasons.

When was the first leap year?

The first leap year in the modern sense in Britain was 1752, when 11 days were ‘lost’ from the month September with the adoption of the Gregorian calendar by Britain and her colonies.

After 1752 we adopted the system still in use today where an additional day is inserted in February in years wholly divisible by four, other than years ending in 00 except for those divisible by 400 which are still leap years (like 2000).

This is certainly not the first use of leap years; the Julian calendar we used before 1752 had a simpler system of leap years, and remember, no calendar is universal. The Islamic calendar Al-Hijra also has an extra day added to the 12th month Zul Hijja on leap years.

When the Egyptians began measuring time by dividing the year into 12 months of 30 days, they added the five extra days onto the end of the year as five days of festivals.

Julius Caesar even tried a ‘year of confusion’ in 46 B.C. The year was 455 days long in the hope that it would sort out the divergence in seasons and months that had occurred.

Celebrations of Chinese New Year traditionally last for 16 days, starting from Chinese New Year’s Eve to the Lantern Festival. In 2022, that is from January 31st to February 15th.

As a public holiday, Chinese people will get 7 days off from work from January 31st to February 6th in 2022.

The most notable dates of the Chinese Lunar New Year 2022 are these three days:

It originated as a Christian feast day honoring one or two early Christian martyrs named Saint Valentine and, through later folk traditions, has become a significant cultural, religious, and commercial celebration of romance and love in many regions of the world.

For two weeks each year at the end of February and start of March, thousands of individuals, companies and groups across the UK come together to share the stories of the people who grow our food and drinks, mine our gold and who grow the cotton in our clothes, people who are often exploited and underpaid.

Can you help us get the message out even louder this Fairtrade Fortnight? This year’s theme is about the climate crisis.

The world’s wealthiest people caused the climate crisis – 50 percent of global emissions are the responsibility of the highest-earning 10 percent. But it’s the communities our Fairtrade movement exists to support who are facing the worst realities of climate change right now. 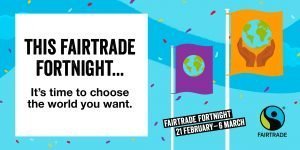 How does Fairtrade support farmers in the Climate crisis?

Fairtrade is about social, economic and environmental justice. These are built into our standards and drive everything we do. A root cause of the inability to adapt to and mitigate climate change is poverty. More money in the hands of farmers is needed if they are to adapt and survive the climate crisis. Choosing Fairtrade fights for improvements in producers’ livelihoods with collective strength through co-ops and their bargaining power, the protection of a Minimum Price and Fairtrade Premiums.

In 2019, Fairtrade also launched an ambitious new living incomes campaign to lead the way to a sustainable future for cocoa farmers. A living income would provide farmers with a decent standard of living – enough to cover all their cocoa farming costs and enough to cover their basic human rights, like a nutritious diet, children’s education and healthcare. Only when they have met these basic needs can they start to meet the challenges of our changing climate.

Why should we eat fruit and vegetables in season?

Seasonal food is fresher, tastier, and more nutritious than food consumed out of season. Also, unlike out-of-season produce which is harvested early to be shipped and distributed to your local retail store, crops picked at their peak of ripeness are also better tasting and full of flavour.

Fruit and veg in season for February in the UK:

The birthstone of February is the amethyst and the birth flower is the violet or common primrose.

See all news
← Rethink your drinks!
Year of the Tiger... →