January symbolises the beginning of a New Year and a time to set out (and hopefully stick to!) some New Year’s Resolutions.

However, there is more to January than just new beginnings…

January was established as the first month of the year by the Roman calendar. It was named after the god Janus (the Latin word for a door). Janus has two faces which allowed him to look both backward into the old year and forwards into the new one at the same time.

In the very earliest Roman Calendars, there were no months of January or February at all. The ancient Roman calendar had only ten months and the new year started on 1st March. To the Romans, ten was a very important number. Even when January was added, the New Year continued to start in March. It remained so in England and her colonies until about 200 years ago!

January regularly produces frost, ice and snow and is the chilliest month of the year in Britain. St Hilary’s feast day on 13th January has gained the reputation of being the coldest day of the year due to past cold events starting on or around this date.

January’s reputation as the month of endings and beginnings has carried on throughout history. Take, for example, the discovery of King Tut’s sarcophagus. On January 3rd, 1924 the British archaeologist Howard Carter and his team uncovered a stone sarcophagus, containing three coffins nested within each other. The last, golden one contained the mummified body of the teenage pharaoh Tutankhamun.

The discovery of the tomb was not only a massive success for Howard Carter, for archaeology and its offshoot branch of Egyptology, but was also a source of chilling controversy. Bizarre and inexplicable events that commenced after the opening of the sarcophagus, such as apparitions of snakes and jackals and sudden deaths, fuelled the myth of the pharaoh’s curse and generated significant attention to the discovery.

Whether you’re a firm believer in ancient curses or a well-grounded skeptic, the story of Carter’s expedition should certainly inspire you to get ahead with your own magnificent discoveries early on in January, while everyone else is still recovering from the holidays.

And if that fascinating find is not enough to give you the kick you need this month, January is generous with plenty of fascinating festivities to keep you entertained.

Kicking off with both Veganuary and Dry January, both offering up credentials for a sure-fire way to stay healthy and burn off some of those excess pounds, possibly gained from overindulgence during the mince pie eating season!

Delving a little deeper into the month, there’s National Shortbread Day on 6th January, National Cheese Lovers Day on 20th January and then back to healthy ways on 18th January for Sugar Awareness Week.

So, the big question, are New Year’s Resolutions worth setting?

There are a lot of varying percentages when it comes to averaging the number of people that are successful in achieving their New Year Resolutions.

So perhaps you need to get a gym buddy, write down realistic goals, or listen to motivational podcasts to keep your goals on track, then you’ll have more chance of sticking to them! You could also try creating incentives for yourself, do something to make the tasks or goals more fun and remember it’s not always about the overall outcome but the process of achieving something!

Some other useful things to know about January…

What British foods are in season in January?

Why not try our delicious parsnip & pear soup recipe HERE? 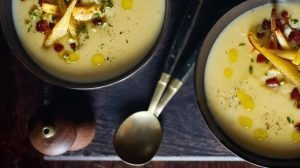 Carnations and snowdrops are the two birth flowers most associated with January.

What is the birthstone for January?

So, it seems January does have a lot to offer, and here’s hoping that your January and indeed your 2022 is a safe and happy one for you and your loved ones.