By the meteorological calendar, the first day of autumn is always 1 September; ending on 30 November.

The name September comes from the old Roman word ‘Septem’, which means seven, because in the Roman calendar it was the seventh month.

The Anglo-Saxons called it ‘Gerst Monath’ (Barley Month), because it was their time when they harvested barley to be made into their favourite drink – barley brew.

They also called it Haefest Monath, or Harvest Month.

The Romans believed that the month of September was looked after by the god, Vulcan. As the god of the fire and forge they therefore expected September to be associated with fires, volcanic eruptions, and earthquakes.

So, what else is significant about September?

Autumn is approaching and it’s Back to School time. September is the month when we celebrate Harvest Festival, Roald Dahl Story Day and Tolkien fans can celebrate Hobbit Day.

Dates for your diary

11th September – The Harvest Festival of Thanksgiving is a celebration of the harvest and food grown on the land in the United Kingdom. It is about giving thanks for a successful crop yield over the year as winter starts to approach. The festival is also about giving thanks for all the good and positive things in people’s lives, such as family and friendships

13th September – The birthday of author Roald Dahl was chosen as a day to promote reading and raise money for the children’s charities which Dahl supported in his lifetime.

14th September – We will have representatives from Snappy Shopper and our Membership Team at the Writtle Fresher’s Fayre.

16th September – Our big beach clean takes place in Shoeburyness; however, if you’re not already booked on this event is now full.

22nd September – Hobbit Day is celebrated on September 22 in reference to its being the birthday of the hobbits Bilbo and Frodo Baggins from J.R.R. Tolkien’s Lord of the Rings.

In the late summer, as the air cools, there are still many beautiful flowers to enjoy and give.

The September birth flowers are the aster and the morning glory.

Asters are mainly symbols of powerful love. Perhaps because of their positive symbolism, according to folklore they were once burned to ward off serpents.

Asters add a punch of colour to the late summer and early fall landscape and require minimal care. 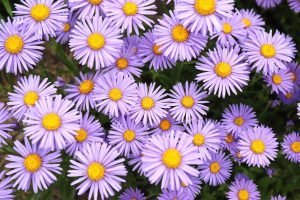 Asters are a great transition plant, bridging the seasons from summer to autumn.

The other September flower is the morning glory. Morning glories are simple symbols of affection.

Those who rise early may be able to watch their lovely blooms open. Morning glory flowers generally curl closed later in the day, hence their name!

What’s in season for September…

September is probably the most abundant month in the vegetable garden. Summer crops, such as salads, tomatoes, courgettes, cucumbers and runner beans are still highly productive while autumn crops such as apples, pears, squash, leeks are nearly ready for harvesting.

See all news
← The Snappy Shopper delivery service is now available in the majority of our food stores...
Our Members' trips are selling fast... →