Back in March, thousands of Fairtrade supporters like you urged MPs to deliver fair climate funding for farmers fighting the climate crisis. In the world of climate action and beyond, a lot has happened since then.

First, the good news: in May the UK government declared tackling climate change a ‘number one priority,’ and pledged £11.6 billion for climate action in low-income countries most affected by climate change [1].

Mass action from people like you helped make this happen. A total of 614 MPs heard that their community cares about climate justice. As a result, MPs from all major parties wrote to Ministers asking for the promised funding to be delivered.

That money can make a huge difference – if politicians follow your lead.

When you choose Fairtrade, you’re choosing more power and more money in the hands of the people behind that product. Resources farmers and workers can use to take on the extreme hardship caused by climate change and unfair trade. 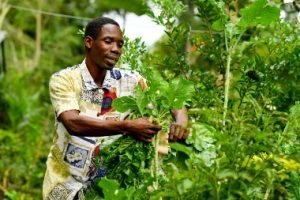 ‘I’m planting trees on my farm so I can control the climate I need.’ Micah Taurus, a Fairtrade coffee farmer in Kenya, is just one of the millions of small-scale farmers taking practical action to tackle the climate crisis every day.

Now, Ministers need to follow your lead. Farmers like Micah are already doing great work to take on the climate crisis, so it’s crucial they have a real say over how the promised funding is used.

Your support will be vital in making sure Ministers listen to voices like Micah’s.

As a Co-op, we have been championing Fairtrade for over a quarter of a century and we are proud of what we have achieved for Fairtrade communities, however, there is still lots of work to do, so let’s celebrate this and raise more awareness this Co-op Fortnight. (21st June to 3rd July)

In the meantime, here’s a date for your diary: Great Big Green Week, 24 September to 2 October!

Organised by our friends the Climate Coalition, Great Big Green Week is a national celebration of positive action on climate.

Why not join in some of our Big Co-op Clean Up’s this summer to help do your bit for your local environment. Click here to find out more.